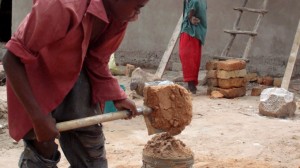 Critics of sustainable development projects initiated by Westerners in Africa often raise a question: what happens when those Westerners pull out? The answer lies in an important concept: community ownership.

When someone is lifted out of the poverty trap, given the opportunity to access health care and education, encouraged to develop an income-generating business, why do we assume that this person will sit idly and simply wilt away once foreign guidance ends? That’s ignoring the will of men and women, in Africa and elsewhere, to earn a better life and fight to keep it.

Africa doesn’t have to be a lab for men in white coats experimenting new models with a helpless population. With no other secondary goal than the understanding that the world is a safer place if its inhabitants live decent lives, the Millennium Villages project (MVP) aims to empower local communities to take control of their destiny. It’s true that it uses foreign funds to bring the most needed elements, like medicine, vaccines, classrooms, clinics, agricultural inputs and roads, but it’s all done with the community’s help and the backing of the local administration and national government.

One such approach implemented in the Millennium Villages is the school feeding program. In order for the meals to be more than mere hand-outs, farmers are asked to contribute by donating a fraction of their maize crop to the school, in return for the subsidized seeds and fertilizers they receive from the project. The meals are also balanced thanks to school gardens, and even poultry projects, which are managed by teachers and students. So children are guaranteed a warm meal every day. The results are lower absenteeism, better concentration, and lower malnutrition rates.

Health is also a cornerstone of such projects, as poor communities in Africa are hard hit by tropical diseases like malaria and HIV/AIDS. But unlike humanitarian interventions where qualified doctors are flown into a disaster or conflict zone to treat people, sustainable development builds local capacities, so that professionals remain within the community. The MVP is training community health workers (CHWs), in cooperation with the Ministries of Health, to distribute bed nets and train villagers in their use, give basic health care, refer pregnant women to clinics, etc. More than 850 CHWs have been trained across the villages, to serve a population of nearly 500,000. As villagers see their lives improve, they strive to maintain their new standards but their success relies on external factors too. In a 2008 report, the Overseas Development Institute noted that the challenge, once the MV program ends, would be continued funding by donors ‘either directly or through national programs’ and the host governments’ willingness and ability to support the project. A measure of such a project’s success is its ability to end whilst ensuring the survival of its values and results.

This originally appeared on the Millennium Villages website on May 5, 2012.