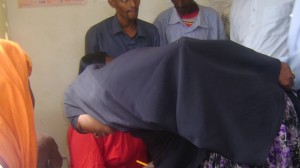 The Community Based Management for Health program, currently being implemented across the Millennium Villages in East and Southern Africa, stopped recently in the pastoralist village of Dertu, Kenya which has 850 households (350 sedentary and 500 migratory). In this difficult, arid area where communities move in search of water and pasture, the role played by Community Health Workers (CHWs) is vital and helps save lives. Though Dertu has a dispensary with a functional six bed maternity ward, a laboratory and a two bed semi-permanent observation ward, the health outreach remains a major component of the Millennium Villages Project (MVP) health policy in the area. Of a population of 6,000, more than 1,000 pastoralists are treated and immunized every month by the mobile health outreach service. With the distribution of treated bed nets to the community, this service also focuses on malaria diagnosis and treatment, enabling the health team to keep the disease in check.

In August 2009, Dertu’s five CHWs received an eight day comprehensive training, jointly developed by the Program in Health systems at the Earth Institute, Columbia University, and the MVP health team in Dertu.

The training was conducted by the MVP health staff and Kenya’s Ministry of Health. Trainers covered topics such as antenatal care, maternal health, newborn care, family planning and management of diseases such as HIV/AIDS, TB and malaria. Additionally the CHWs received training in data management and use of information tools for monitoring and evaluation of the impact of their activities within the community.

Community health volunteers, such as the mobile teacher and two community animal health workers, also joined the sessions. The volunteers are recruited to work with the pastoral communities and assist the CHWs in collecting data on vital events such as births and deaths, as well as referring the sick to health facilities.

Not only did the trainees attend in-class sessions, but they also underwent practical training held at the nearby Garissa Provincial Hospital. Here, they carried out child growth monitoring under the guidance of a clinician. They refreshed their knowledge and skills by performing Middle Upper Arm Circumference Measurements (MUAC) to children 6 – 60 months old, as well as proportioning and administering food rations of soy beans and vegetable oil to malnourished mothers and their babies. They also observed record taking and the identification of signs and symptoms of malnutrition in children under 5.

“I learnt many new and interesting things at the training, and the best part is receiving a reference manual that I can consult if I forget some facts when I am out with the community,” said Ahmed Abdinoor, one of the CHWs. ‘Now I look forward to the next monthly outreach session to implement what I learned,’ he added.

The Dertu training is part of a series of trainings for the MVP sites that is supported by the program for health systems at the Earth Institute, and The MDG Centre, East and Southern Africa. Its main aim is to strengthen health systems through innovative initiatives that provide comprehensive trainings for the CHWs and the volunteers assisting them. The trainings also involve providing CHWs with tools for their work such as special bags to carry weighing scales, rapid diagnostic tests, ORS rehydration salts and manuals.

This originally appeared on the Millennium Villages website on September 9, 2012.