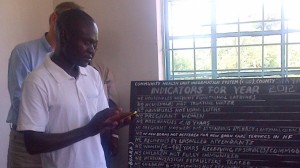 As part of a visit to the Millennium Village of Sauri, Kenya to assess the status of the local health system, our group’s first stop was the Marenyo Health Centre where we were greeted by the clinic director, staff members from the Kenyan Ministry of Health, and Community Health Workers (CHWs).

At this particular clinic, a senior CHW oversees about eight CHWs. The CHWs are responsible for approximately 100 households and spend their days out in the community creating a vital link between village residents and the health clinic. They represent the backbone of health care delivery in the Millennium Villages Project (1millionhealthworkers.org).

After a tour of the facility’s delivery room, washroom facilities, drug storage room, dispensary, and laboratory, we met with the CHWs. They brought in their “Community Health Unit Information System” – a large chalkboard covered with statistics showing the work done by the CHWs in the district.

The CHUIS chalkboard helps CHWs track key health indicators, focusing on the most vulnerable groups (the top priority for the CHWs) – pregnant women, newborns, and children under five years old. The board highlights problems that must be addressed, such as:

– the number of children who are moderately or severely malnourished, not dewormed, or not fully immunized;

– the number of deliveries by unskilled birth attendants (a problem that is slowly being addressed as a culture of institutional deliveries starts to take root); and

– the number of pregnant mothers not attending at least four antenatal clinic visits, which is the target throughout the village.

The CHUIS also focuses on positive indicators, such as the number of fever and diarrhea cases managed. The chalkboard records the numbers for each month, allowing the clinic staff to detect any patterns or seasonal variations and to better address any issues.

While the chalkboard may seem low tech, it is in reality powered by a high-tech backbone. The senior CHW whipped out his smartphone to give us a demonstration of CommCare, the electronic health (eHealth) system used by the Millennium Villages. CHWs head out on their daily routes with a smartphone in hand, which has the CommCare application installed. Arriving at a household, the CHW uses the simple, clear interface to run through a list of questions and collect data on the health of family members. In the case of a health issue, such as a fever caused by malaria, the CHW can use CommCare to record the encounter, receive confirmation on anti-malarial medication dosage, and alert the primary health care system of the fever for follow-up.

With CommCare providing an instant connection between CHWs and more senior medical staff at a health clinic, CHWs are able to bring the primary health system to a patient’s doorstep, ensuring that the whole community is part of the health network – surmounting a huge challenge for often-remote villages.

Later that day, we were able to see the CHWs in action. We were privileged to be able to visit two households in the Gongo area to see how outreach by the CHWs is improving the health of some of the youngest Millennium Villagers. 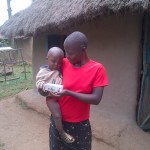 One of the key interventions in the area is the provision of micronutrients for children under two years old. We met with mothers who explained how the CHW brings them sachets of micronutrient powder, and how they give their babies one dose of the vitamin and mineral-rich powder a day. The mothers told us that they normally mix the powder with porridge because it mixed together the best out of all the foods they had tried. They told us that they noticed a marked improvement in their babies’ health, energy, and appetites after about a month. The only problem they were having was that they wanted more sachets of powder for the slightly older children!

The CHWs joined us on the visit, and the mothers told us how their CHW was integral to the process. While in some trials parents have had problems properly mixing in the powder, in Sauri CHWs deliver the micronutrient sachets in person from the beginning to explain how the powder worked and why it was a worthwhile investment of time and energy for the health of their children. CHWs also collect the used packaging, which ensures that the powder is really getting used.