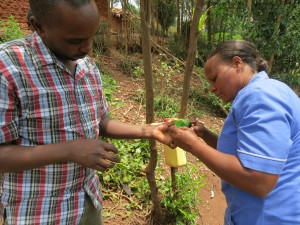 Unclean water and poor hygiene remain key problems to solve in the Millennium Villages, but Community Health Workers are serving as educators and health advocates to change this. In the process, they are encouraging long-term lifestyle changes and reducing disease incidence.

While the seventh Millennium Development Goals’ target is to reduce the proportion of the global population without access to safe water and sanitation by half by 2015, we have not yet met this goal.

Progress in sanitation has been slow. Thirty-seven percent of the developing world’s population still does not have access to improved sanitation (UNICEF). For drinking water, it may appear that most of the world has reached the MDG target for “improved” access, as 86 percent of the developing world now has a better supply. However, “improved” can have many meanings, at times including water that still has high levels of arsenic or fluoride.

Many Millennium Villages have made great strides in improving infrastructural access to clean water. Workers have installed more than 335 miles of water pipes across MDG villages. Areas, such as Bonsaaso, Ghana and Poutou, Senegal have new wells (MillenniumVillages.org). These infrastructural advances reduce the chances that bacteria and pathogens will enter the water and free up time that women would have spent walking to find water.

Yet not all villages have been able to make such infrastructural changes, and even for those that have, hygiene education is still important. While workers have installed 246 spring-protected wells and have dug 10 boreholes in Sauri, for example, most residents still take water from local, unprotected sources. Families are struggling with health problems that relate to unclean water and poor sanitation: diarrhea and pneumonia. CHWs are taking action. 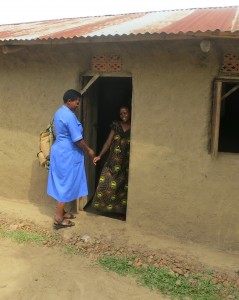 CHWs are making strides to communicate about links between water and health on a one-to-one basis within a new standardized framework of healthcare. One of thei

r jobs is to serve as sanitation educators. They talk to their patients about the necessity of cleaning their hands because it reduces disease incidence. Another job is to teach them how to install hand-washing facilities, such as tippy taps. These stations, which usually stand near latrines, stop the transmission of pathogens from fingers to food.

CHWs also inspect their patients’ water sources. Since livestock and latrines are often near the local people’s water source, it can become polluted easily. When there is no available municipal water supply or water infrastructure, CHWs talk to residents about boiling their water or purifying it through other means. In villages with high disease burdens and water and sanitation challenges, CHWs are inspiring lifestyle changes to promote health.

Every day, 3,900 children die because of unsanitary water or improper hygiene (UNWater.org). By improving water and hygiene habits, however, the global disease incidence could decrease by 3.6% (WHO). CHWs are playing a key role in this effort.

Help spread the word about CHWs. Tell your friends to visit 1millionhealthworkers.org to learn more about the campaign to scale up CHWs in sub-Saharan African by the end of 2015.

Learn how to build your own hand washing facility by watching this video: