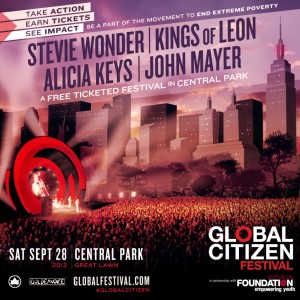 “We are global citizens…we’re gonna change the world…”

With just a few words, Stevie Wonder captured the essence of the Global Citizen Festival this past Saturday on the Great Lawn of Central Park in New York City.

This is the second year of the Global Citizen Festival, a major campaign to secure commitments from citizens, public and private organizations and governments to eradicate extreme global poverty. In addition to Mr. Wonder, the star-studded musical performers included John Mayer, Alicia Keys, and Kings of Leon, with special guests Janelle Monáe, Elvis Costello and Bono. Leaders from governments, private and public organizations and Ban Ki-moon, Secretary General of the United Nations, spoke passionately about the need to take action so that under-served populations can lift themselves out of poverty.

The One Million Community Health Workers Campaign was highlighted as critical to this fight to end extreme poverty by helping to achieve the health-related Millennium Development Goals. This message was delivered by Professor Jeffrey Sachs and actress Olivia Wilde, reaching a live audience of nearly 75,000 and 15 million people via live stream.

“I am so proud to support Professor Jeffrey Sachs and the One Million Community Health Workers Campaign to train individuals from the communities themselves to provide health care to people in sub-Saharan Africa. Let’s give a hand to the telecommunications and pharmaceutical companies for making this campaign possible,” said Ms. Wilde.
Thanks to the actions taken by Global Citizens, these industries have made strong commitments:

Her Excellency Joyce Banda, President of Malawi reinforced the importance of health workers on child and maternal health as she recounted her own difficulties during childbirth. She said, “I am appalled that so many woman die, giving life” she encouraged all global citizens to fight for this important issue and announced the Malawi’s commitment to scale-up Community Health Workers from 10,000 to 29,000 by 2015.
Secretary General of the International Telecommunication Union – UN Broadband Commission (ITU-BCC), Hamadou Toure highlighted the importance of these commitments: “a mobile phone in the hands of a health worker is more than just a phone, it is an essential medical device… ending extreme poverty will take a broad movement, including governments, global citizens, charities, and corporations like the ones standing next to me today.”

His Excellency Dr. Tedros Adhanom Ghebreyesus, Minister of Foreign Affairs of Ethiopia and Dr. Fatoumata Nafo-Traore of Roll Back Malaria also shared their support of the campaign by highlighting the link between health workers and accessing those in the most rural communities. “Community Health Workers are the key to getting vaccinations to children who don’t otherwise have access to them”, said Seth Berkley, CEO of GAVI. “Help us help the Campaign for 1 Million Community Health Workers.”

With the backdrop of a cool, crisp fall evening and tranquility of the night sky, Mr. Wonder mesmerized the audience and closed the Festival with heartfelt lyrics “…believe our own magic…join us and the world will live as one…”