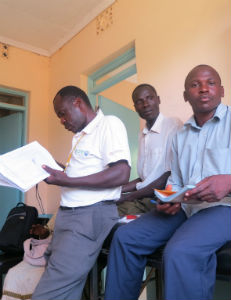 On a beautiful day in February I was able to speak with Community Health Workers in the Sauri Millennium Village Project in Kenya. A CHW lives in his or her community and understands the nuances of the region and the people who live there. In many ways, he or she serves as a cultural translator between a new health system with modern medicine and local people who have for generations had their own approach to addressing health concerns.

I spoke with CHWs about this tension between tradition and modernity in medical practices. In many rural communities, people often approach illness through the lenses of religion and tradition. While the majority of Kenyans are Christian, each tribal group has its own traditional approach to health. When a person becomes ill, he or she will often first contact a medicine man who prepares herbs and prays for the sick individual. As such, many people do not connect illness to unsanitary water or mosquito bites, but instead view it as the result of bewitchment.

Today, CHWs travel around these villages, visiting households and providing modern medicine, but they often struggle to reconcile these new techniques with the “old ways.”

“They don’t want to come to the clinic,” CHW Lilian Atieno chimed in when asked about the hardest part of her job. Lilian is a CHW in training and has only been on the job for a couple of months. Her supervisor and lead CHW for Gongo, Edward

Ogilo also finds that hesitation of the community to use modern medicine is a challenge.

“They will go to the traditional medicine man and then come to the clinic only when things get really bad,” Ogilo said. “So something that could have been treated easily in their home becomes a much more difficult case. If they had just gone to the health center or called us when the symptoms first occurred, we could have avoided a lot of problems.”

Donald Apat, Health Coordinator in Sauri, wrote that CHWs face similar challenges in the Kenyan Kibera slum. Some of the traditional herbal medicines that residents use destroy children’s livers, and local hospitals do not have a remedy for this problem.

“Kenyatta national hospital—its largest teaching and referral hospital— doesn’t routinely admit patients with liver damage due to herbal medication because they don’t have the capabilities to reverse these conditions,” Apat wrote in an e-mail.

Modern facilities and treatment are also particularly important for the health of pregnant women. During labor, many women seek a traditional birth attendant (TBA) to help with antenatal care. If there are any complications during labor, however, and the TBA lacks the resources to deal with them, transportation to a rural clinic or a larger health facility is slow, due to a lack of roads and other infrastructure issues.

Another concern is for HIV/AIDS pregnant mothers who, without testing and treatment, will pass the disease on to their newborns. Clinics and health facilities test all pregnant women for HIV/AIDS, treating the affected mothers and giving their children retroviral drugs that will allow the child to live an HIV negative life.

While this practice is safe and successful, some mothers choose not to be tested. Many are worried about the stigma that goes along with the disease. CHWs are actively involved in campaigns to combat stigma and promote testing and treatment of sick patients. Many of these campaigns have been successful and the community is starting to see the positive effects of modern medicine.

“CHWs have managed to convince their neighbors to test for HIV and some turn to be positive, but the level of secrecy and privacy they hold is amazing,” Dr. Apat wrote about the CHW’s impact of increasing rates of HIV testing.

At the end of the day, CHWs aren’t just community members who check on sick people and deliver bed nets. As CHW Maurice puts it, “we need to educate our people and end their ignorance.” CHWs are important to this cause because they speak the language and culture of their community.

Achieving the MDGs will not only require having strong health systems, but people who know how to access these systems and feel confident in knowing that their lives will be better for it. The CHWs understand the importance of religion and tradition. Indeed they may have been raised with similar beliefs, but they also know that modern medicine can save lives. In fact, we cannot achieve the the health-related MDGs without CHWs, particularly in the most rural parts of our global community.

Help spread the word about CHWs. Tell your friends to visit 1millionhealthworkers.org to learn more about the campaign to scale up CHWs in sub-Saharan African by the end of 2015.