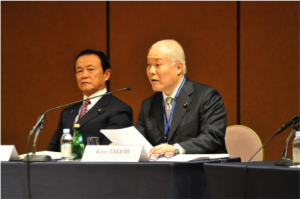 As the second annual World Health Workers Week (April 7-11, 2014) draws to a close, we wish to look back at the ways in which community health workers (CHWs) have been honored over the past year – especially for their incredible power for aiding social and economic development through the health sector. In particular, the World Bank is to be commended for excellent work in emphasizing CHWs.

The World Bank and the Government of Japan, with the Japan Center for International Exchange, organized a major conference in Tokyo this past December. They considered a set of case studies on Japan and ten other countries’ experience moving towards, achieving, and sustaining universal health coverage (UHC).  The organizers convened close to 200 health ministers and high-level representatives from around the world to create an in-depth dialogue.

Key policy messages from the 11-country study indicate that the successful expansion of health coverage and adoption of UHC will require: 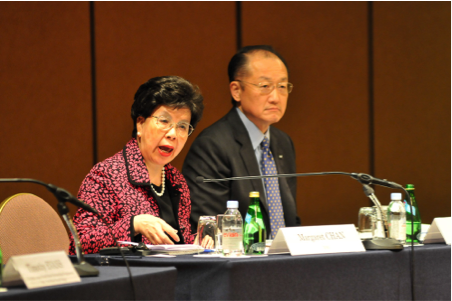 Each of the countries included in the study—Bangladesh, Brazil, Ethiopia, France, Ghana, Indonesia, Japan, Peru, Thailand, Turkey, and Vietnam—are in a different stage and face different challenges on the path to UHC.  Each country requires an integrated set of reforms that coordinates the priorities, existing mechanisms, and financing schemes of public and private stakeholders on national, municipal, and community levels.

CHWs were discussed in numerous contexts as an effective resource in the efforts to create a cost-effective, sustainable, and scalable expansion of healthcare in low-resource and marginalized communities. Case studies and panel discussions with Ministers of Health and policy experts made it clear that CHWs are a cross-cutting solution that can have a direct impact on economic and social development, in addition to health indicators.

Unfortunately, while their role may be vital in achieving UHC, CHWs are an often-overlooked component of Human Resources for Health (HRH). This oversight may be due to a lack of federal focus on community health policy and scale-up, leaving much of the work to NGOs, as well as a failure to incorporate CHWs into wider health systems. Professor William Hsiao (Harvard School of Public Health) described CHWs as “obvious low-hanging fruit for low-income and lower-middle income countries,” a proven solution that is underutilized in national health policy.

However, events such as this conference in Japan show that CHWs are achieving more prominence within the wider HRH discourse. They are low-cost and highly effective members of the health workforce whose capacity to expand the delivery of basic preventive and primary care services has been demonstrated through the implementation of many diverse and successful programs, as demonstrated by the 11 case studies.

This reflection on CHWs comes at a key time, as we celerate the 2nd annual World Health Worker Week. Hopefully this greater focus on the role of CHWs in achieving UHC will gain the momentum necessary for their establishment as a central facet of every government’s health policy.

With the majority of CHW cadres still deployed by NGOs and CBOs as health workers who are not integrated into national health care systems, further scale-up of successful CHW programs requires political will and commitment.  The conference, which brought together high-level public and private stakeholders, was ostensibly a step in the right direction; the Campaign and partners must now demand follow-through.

This is why the Campaign is a member of the Health for All Campaign, which advocates for UHC as a post-2015 goal. To show your support for this civil society effort, sign the Call to Action here and be part of the conversation at #health4all.

Join the conversation on CHWs, and make sure that this fantastic momentum keeps going past this very successful WHWW! Follow the discussion at #WHWWeek and #healthworkerscount

This post was co-authored by Maya Wedemeyer and Sarah Zimmerman.