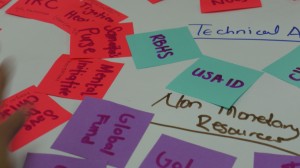 Approximately 28% of the estimated four million people that live in Liberia lack access to healthcare, which is defined as living more than 5km from a health facility. Access to health services are limited by a variety of factors such as inadequate availability of skilled health professionals, long distances to health facilities, and poverty, to name a few. Women and children bear the highest burden of poor health in Liberia. The maternal mortality rate in 2007 (Liberia Demographic and Health Survey) was estimated to be approximately 994 per 100,000 live births. The results of the same 2007 survey indicated that the under-five mortality rate was 110 per 1000 live births, and the neonatal mortality rate was 38 per 1000 live births. With less than two years remaining to the 2015 deadline to meet the Millennium Development Goals (MDGs), well-coordinated and consolidated actions must be taken to improve maternal health and reduce under-five mortality.

A community health system helps alleviate these challenges by delivering basic primary health care directly to the household, particularly for vulnerable populations, and by establishing a continuum of care for a variety of conditions. Recognizing this, Liberia is taking advantage of the success of their general community health volunteers (gCHVs) and has recently finalized a Community Health Roadmap that details the upgrade and expansion of this program nationwide. The Liberian Ministry of Health and Social Welfare (MOHSW) will be sending the Roadmap to print in the coming weeks – so stay tuned to our website to see a digital copy!

To celebrate the culmination of this hard work and keep the momentum going, the Liberian MOHSW invited the Campaign to host a Costing and Implementation Planning workshop to highlight essential next steps in completing the objectives set forth in the Community Health Roadmap. During the first week of June, two of our team members – Heather Cobb, 1mCHW Campaign Partnerships Advisor, and Anne Liu, 1mCHW Campaign Implementation Advisor – traveled to Liberia to host the three-day Costing and Implementation Planning workshop.

During the workshop, the MOHS 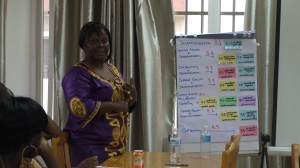 W brought together county health leaders and disseminated the Community Health Roadmap to six of Liberia’s 15 counties. Because implementation of the objectives outlined in the Roadmap will rely heavily on health workers at the county level, it is essential to have their “buy-in” to the document. The Roadmap was well received by county leaders and many were happy that community health, specifically Liberia’s gCHV program, was being targeted for upgrade and expansion.

Additionally, at the central level, members of Liberia’s Community Health Technical Working Group (TWG) gathered to review a community health costing tool developed by Management Sciences for Health (MSH) for 1mCHW Campaign purposes. The Community Health TWG used the tool to analyze the different costs involved in implementing the scale-up plan laid out in the Roadmap. By exploring the costs of different scale-up models, Liberia’s MOHSW was able to better understand how to utilize their resources to reach full population coverage of gCHVs by 2017.

The Roadmap highlights 2017 as the target for full scale-up of the gCHV program – that is no small task! To strategize abo 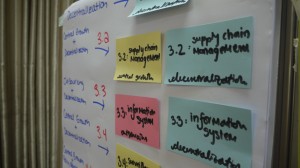 ut how to reach this goal, the TWG explored the implications of choosing different growth models for the implementation of the scale-up plan detailed in the Community Health Roadmap. This included an in depth analysis of stakeholders and where they are working geographically, and how to leverage certain partnerships in innovative ways, su ch as through outsourcing or franchising.

Obviously, three days wasn’t enough time to nail down all the details of costing and implementing Liberia’s Community Health Roadmap. So the Campaign continues to provide technical support to the Liberian MOHSW from our New York office by helping cost out various aspects of the gCHV program design. The Campaign will also be having a Junior field specialist, Amy Veinoglou, work directly with the MOHSW, Tiyatien Health, and other key partners this coming fall to provide in-country support. Stay tuned for updates from Amy! 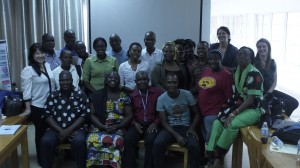