Hello everyone, my name is Katy Iglehart and I am the West Africa Portfolio Intern with the 1mCHW Campaign. I spent a month in Accra, Ghana, supporting the Financing Community Health Worker Systems at Scale in sub-Saharan Africa conference, and then spent a few weeks in Kumasi, Ghana, helping conduct a situational analysis with the Technical Working Group (TWG) to support the design and implementation of a CHW pilot program in the Ashanti region. During this time, I spent some time in the field interviewing community health workers (CHWs) at the Millennium Village Project (MVP) in Bonsasso.

Soon after the Campaign finished up the situational analysis, I went to a district health facility and some of the Community-based Health Planning and Services (CHPS) compounds in the district of Amansie West, which was about a two-hour drive from Kumasi. Bright Asare, the CHW Manager for the Millennium Villages Project (MVP) in Amansie West, led the way.

At 6am Bright picked me up and we headed out towards Amansie West for what would be a long and eventful day. After visiting the district health office in Amansie West, the MVP office for the village of Bonsaaso, and the Manso Nkran CHPS compound, we headed to the Bonsaaso CHPS compound so that I could meet with some of the CHWs. I was eager to hear ideas about the new CHW pilot program from those on the ground.

As we entered the Bonsaaso CHPS compound, Bright introduced me to some of the nurses and CHWs. Before I knew it, Bright had arranged for me to interview five CHWs, and had them lined up on a bench, ready to answer questions. I explained that talking to one was enough, but in true Ghanaian fashion, they wanted to be as helpful and accommodating as possible. 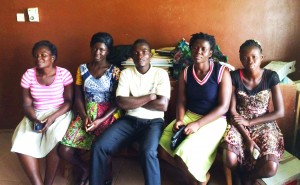 CHWs in Bonsasso (from left to right): Teresa, Naomi, Hayford, Esther and Benita

I sat down with the CHWs and started the conversation by asking them to describe their typical day as a CHW. Teresa, the eldest and most experienced CHW, answered my questions thoughtfully. She explained how the CHWs visit at least five households per day to monitor maternal and child health, treat malaria and diarrhea, and educate the community about family planning and nutrition. They carry basic supplies to dress wounds, and mid-upper arm circumference (MUAC) tape to monitor malnutrition. In rural areas, such as Amansie West, the most common diseases, like malaria, pneumonia, and diarrhea, are also the most easily treated. This gives CHWs the ability to dramatically improve health in their village, where there is limited access to healthcare.

I asked what the best thing about being a CHW was and Teresa explained that the job gives them a sense of pride and respect within the community, which is very important in the Ghanaian culture. The CHWs also take pride in their ability to help their community, and to see the reduction in infant and maternal mortality. Teresa said,

“Before CHWs, it was difficult because there was a lot of neonatal work. There is less death now; the CHWs help a lot. We teach about family planning, so there’s a lower birth rate and it’s easier for the community to handle. The CHWs help the whole community.”

I inquired further about the job itself, and asked what changes they would recommend. This was when Hayford spoke up, eager to contribute his thoughts. Hayford and Teresa both explained to me how they have difficulty maintaining authority in the community, as some people only use traditional medicines and are skeptical of what the CHWs teach. They also said they would like to receive more pay and that they experience logistical difficulties, such as the lack of equipment and transport, as most CHWs travel by foot. Teresa explained,

“We would like the payment to increase. We need raincoats and boots as well. Sometimes when you’re in the house at night, you get a call late and you have to go out in the rain without a coat”.

We spoke further about challenges, many of which were logistical, and about the inaccessibility of services. My lasting impression was that they were happy with their job, but that the system needed support. The foundation is there, and with the SDGs promoting an increased focus on health workforce, there is potential for great investment in CHW programs across sub-Saharan Africa in the post-2015 era.