Mahawwa, the mother of a one and half year old, noticed that her son who was seriously ill had been passing watery stools for more than four times a day. She decided to take him to the person she believed to be the “medical expert” of the community. The latter prescribed some antibiotics to Chris,… [ More ] 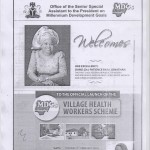 The launch of the Village Health Workers (VHWs) Program by the First Lady of the Federal Republic of Nigeria on the 4th of February 2014, through the Office of Special Assistant to the President on Millennium Development Goals (OSSAP-MDG), is a practical demonstration of Federal Government’s commitment towards accelerating the achievement of the Millennium Development… [ More ] 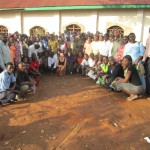 The One Million Community Health Workers (1mCHW) Campaign has embarked on a novel initiative to work with a variety of partners on scaling up CHW programs throughout sub-Saharan Africa. In order to maintain sufficient data on these efforts we have already begun our count to one million community health workers. The Operations Room is a… [ More ]

Phionah Ahumuza is a 23 year old mother and wife living in the Ruhiira Parish, Uganda. She is a senior Community Health Woker with 140 house holds that have 150 children under five and currently five pregnant mothers. She was born in Ntungamo district and got married in Isingiro, Ruhiira. Phionah has been a CHW… [ More ]